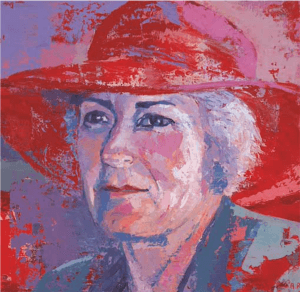 On behalf of everyone involved with Hearing the Voice, we mark with great sadness the death of Sandra Escher on May 31 2021, and send our condolences to Marius Romme, their family, and all those who drew inspiration from her presence and from her work.

We pause here to honour our memories of Sandra and to celebrate her life.

Sandra Escher – formidable, sparkly eyed, perceptive, canny, compassionate, and abrupt in a manner that is the special gift of the Dutch. Sandra, a journalist who brought voice-hearing into the public domain, quite literally, by masterminding the appearance of Marius Romme and Patsy Hague on Dutch television and the call-in that led eventually to the founding of a people’s movement. A researcher whose interviews with children and their families led to transformations in the ways we understood and respond to young people who hear voices. An indefatigable international campaigner, alongside her husband Marius Romme, for the rights and freedoms of people who voices.

We first met Sandra in 2011, when she and Marius accepted our invitation to be fellows at Durham University’s Institute of Advanced Study and help shape the Hearing the Voice project. In those few months, we did our Maastricht training with her, we learned from her, we confronted our ignorances through her penetrating questions, and laughed with her on many an occasion. She talked about voices but also about her family, her love of horses and of Curaçao, her crossing of borders of all kinds. Sandra never missed a trick. Over the years, at workshops and congresses across the world, in seaside restaurants in Thessaloniki, at the launch of our major exhibition Hearing Voices: Suffering, Inspiration and the Everyday, it felt as though every reconnection picked up seamlessly from where we had left off.

Sandra was a great friend to Hearing the Voice, and challenged us to do and be more than we had thought possible.

An online condolence book has been established here.

Angela Woods, Charles Fernyhough and Victoria Patton on behalf of Hearing the Voice.