A review of ‘Hearing Voices: suffering, inspiration and the everyday’ by Safia Aslam 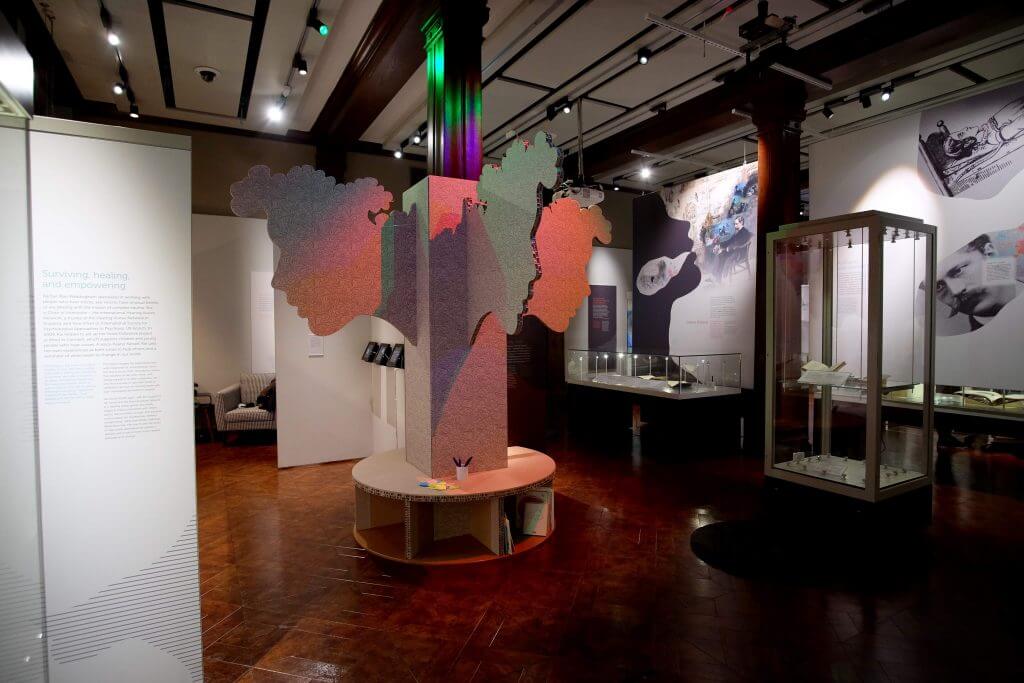 Safia Aslam is the co-facilitator of a peer support group for people who hear voices in Warrington. In this blog post, she shares her reaction to our recent exhibition Hearing Voices: suffering, inspiration and the everyday. Safia writes:

I attended the exhibition on voice-hearing in Durham on its last weekend – I wish I had been able to come sooner!

I am a voice hearer and have heard voices from some animals, people and plants for as long as I can remember. I became unwell with voices and hallucinations in 2011 when I was in Paris; I was sectioned out there and when I came back home I went to the GP and was put under the care of the local Early Intervention Team. I had what they called a ‘miraculous recovery’ and then relapsed in 2013. I knew I was unwell, and felt controlled by my voices – they would stop me in my tracks, and not allow me to eat more than five blueberries a day for about three weeks. I knew that the crisis team and my community psychiatric nurse were there to help me, but I felt quite paranoid at the time. Since then recovery has been a slow and bumpy ride. Thankfully, I’ve had no further relapses and I am now married, running my own business, facilitating a hearing voices group and slowly coming off the medication I have been on since my breakdown.

Finding out that an exhibition had been put together to explore voice-hearing was very exciting. I was amazed to see the cabinet devoted to Marius Romme and Sandra Escher, the founders of the international Hearing Voices Movement.  Our very own hearing voices group in Warrington is an extension of what they started – peer support. I was also amazed to find out that there have been books written from a perspective alternate to “you have a mental illness – here, take these pills”.  Although medication has helped me, I think I could have “recovered” with the right support and guidance without it. (However, I don’t believe that non-medical methods are for everyone as we are all individuals.)

I digress! Back to the exhibition: I was pleasantly surprised to learn that there are famous writers that were voice hearers and that their creativity and work was partly due to the voices that they heard. When I shared this information to our hearing voices group they were just as amazed as I was. Virginia Woolf and Charles Dickens: both literary artists, both voice hearers!

I was also really struck by the artwork by young people who hear voices, which was on display at the entrance to the exhibition. The artworks explored their thoughts and feelings about how they are or would like to be treated, as well as what they want others to know about their experiences. This could be relevant to all ages, but it was interesting to see the perspective of such young minds. I particularly liked the broken mirrors as they were a great metaphor which I could relate to. The message I walked away with was regardless of whether you have a mental illness or mental health problem you are still the same person, just a little different from the break down in your life.

During my stay in Durham, I managed to catch a guided tour of the exhibition and I got a lot more insight and a greater understanding of its purpose and aims. I had almost forgotten that almost all my life the voices had helped guide me in a positive way, and it was only after a very stressful life event that I began to suffer from distressing voices. I’m surprised that statistics show that there are only 1% of the population that hear voices that don’t need help in any form as their voices are not a hindrance to their life. I believe the number to be a lot higher, however most people won’t openly admit to hearing a voice, due to fear of stigma. The best thing about the exhibition was that it wasn’t focused on finding a ‘cure’ for voices, which is what I have been subjected for the past six years. Instead, it showed that hearing voices is a phenomenon that happens to some people and that hearing voices can take many different forms and are not all distressing. This is a much more positive way to look at voice-hearing.

I would love to see the exhibition again and look forward to seeing it tour across the UK in the future. It would be great to see it in some of the other major cities, such as Manchester or London.