Voices, Visions and ‘Persons Under the Floor’: ‘Delusions’ and ‘Hallucinations’ in Nineteenth-Century Psychiatry

This post is based on my current research project provisionally entitled ‘A History of Unreality’ and carried out in collaboration with Hearing the Voice. The project explores and maps the historical roots of two major divisions in psychiatric diagnostics: between affective (mood) disorders and cognitive (schizo) disorders, and between ‘delusions’ and ‘hallucinations’ as distinct phenomena. Psychiatric knowledge about human experiences such as voice hearing is, of course, only one way of understanding and explaining such experiences. Following from this, by demonstrating the historical and cultural specificity of such knowledge, my hope is that this project will contribute to a more flexible and inclusive perspective on a set of phenomena that modern medicine often labels as symptoms of pathology, but which are not necessarily perceived as such by people who experience them.

Do you know the difference between a delusion and a hallucination? When I asked Google, the first answer I was presented with was from the website BrainBlogger, which defines delusions as ‘false or erroneous beliefs that usually involve a misinterpretation of perceptions or experiences’ and hallucinations as occurring ‘in any sensory modality (e.g., auditory, visual, olfactory, gustatory, and tactile)’ with auditory hallucinations, such as hearing voices, being the most common. In a clinical context, then, these words are meant to help health professionals and service users distinguish between two types of experiences or phenomena, one which concerns our thoughts and how we perceive the world around us, and the other what kinds of information we receive through our five senses. In other words, if I feel as if an external force is controlling my thoughts, this would be a delusion, while hearing a voice commanding me to do something would be a hallucination.

According to current diagnostic literature, these types of experiences can manifest in a number of different psychiatric disorders, but are most common, and seen as primary and defining symptoms, in the schizo-disorders, or what we might call ‘cognitive’ disorders, while they are more marginal in the group of mood disorders. This division of different types of psychiatric conditions into ‘affective’ and ‘cognitive’ is central to how we understand and diagnose mental illness in the modern period, and doctors have argued for this kind of diagnostic separation since the mid-nineteenth century. However, the current belief that hallucinations and (especially ‘bizarre’) delusions primarily manifest in cognitive, or schizo-, disorders, is more recent. Moreover, while contemporary medicine makes a clear distinction between delusions and hallucinations, this separation was not always made in the early years of psychiatry. Sometimes the two words were used interchangeably, but often ‘delusions’ were used to denote both ‘false’ beliefs and sensory experiences such as seeing visions or hearing voices. For instance, John Conolly (1846: 565), medical superintendent at Hanwell asylum and one of the first British lunacy commissioners, suggested that ‘Delusive impressions as to sound are very troublesome to many patients; they hear voices, and hold conversations and arguments; and they fancy their relatives are imprisoned, or that persons are allowed to persecute them.’

However, a number of nineteenth-century medical writers were keen to make diagnostic language more precise; thus, we see in this period several attempts to clarify the difference between delusions and hallucinations for clinical purposes, such as a paper by J.H. Blount (1856) entitled ‘On the Terms Delusion, Illusion, and Hallucination’. Remarking that ‘no science can be definite or precise, whose terms are undefined and inexact’, Blount lamented the confusion plaguing the field of psychological medicine (psychiatry) in terms of identifying, defining, and naming ‘false’ beliefs and sensory experiences, critiquing several of his peers for their carelessness in the use of diagnostic terms. Proceeding from the argument that ‘mental aberration may be said to arise from either perverted perception, or perverted conception; perception relating to present sensation, and conception to the recollection, combination, judgment, and abstraction of past sensations’, Blount held that ‘illusion and hallucination are erroneous perceptions, and that delusion is erroneous conception’ (Blount, 1856: 494, 500).

While Blount’s article drew attention to the lack of precision in regard to diagnostic definitions of these terms, many of his peers would have agreed with his position: mid-nineteenth-century physicians were increasingly conscious to use ‘delusion’ and ‘hallucination’ to denote different phenomena in their published work. However, asylum case notes from the same period present a far more ambivalent picture. On the busy asylum wards, medical officers used ‘delusion’ as a diagnostic term with much more frequency than ‘hallucination’, often as a catch-all word to denote sensory experiences such as hearing voices, seeing visions, or having physical sensations such as bugs crawling under the skin, as well as ‘paranoid’ beliefs (many patients who came into the asylum were convinced that people around them, such as family and friends, were conspiring to have them murdered, and it was not unusual for patients to refuse their food for fear of it being poisoned).

For instance, in Bethlem, the famous south London asylum, the word hallucination was scarcely used at all in case notes during the 1840s. Instead, we come across cases such as that of a 74-year old labourer’s window admitted in the spring of 1847 and described as ‘Very much depressed, restless and fidgety, has various delusions such as hearing voices in the night and fancying that horses are being changed into men’, and a 48-year-old servant described as having ‘a great many delusions which are frequently changing, sometimes thinks he hears persons talking to him from the ground, then that he has immense wealth and absolute power’. Similarly, a 36-year-old wife of a breeches maker was said to labour under ‘various delusions, fancies that there is a great deal of witchcraft about the place by which persons are made to disappear and reappear before her’. 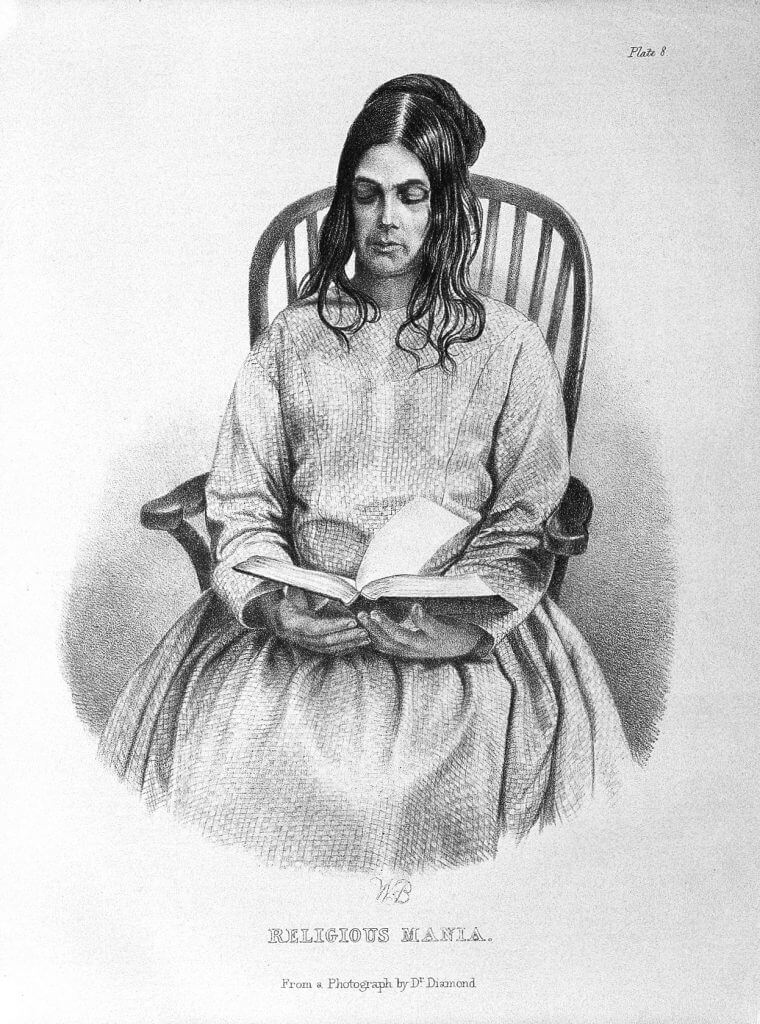 In Hanwell asylum in Middlesex (today part of Greater London), the words ‘delusion’, ‘hallucination’, and ‘illusion’ were sometimes used interchangeably; for instance, a 42-year-old servant was described as having ‘illusions of the sense of hearing’. However, as in Bethlem the term delusion dominated, and was used to denote a range of ‘unreal’ experiences. Thus, a 17-year-old servant admitted in 1863 was described as ‘incoherent, has delusions relative to her being in conversation with persons not present and that her present suffering is a punishment for her unkindness to her late mistress’, while the 30-year-old wife of a carpenter admitted in the same year was said to be ‘melancholic’ and ‘under the delusion that there are persons under the floor and that she hears voices at night, which the nurses declare is not possible everything being quiet’ (incidentally, different versions of the belief that there were ‘persons under the floor’ occasionally appears over several decades and across a number of asylums, and may be a variation of another delusion associated with the fear of neighbours listening in and judging one’s behaviour: a more common ‘false’ belief was that of hearing voices ‘in the walls’).

What the overall picture emerging from mid-century case notes suggests above all is that it was not always clear – nor considered significant – whether patients heard an external voice talking to them or felt that they were being communicated to by a non-existent person (or other entity). For instance, many patients believed that they were in direct communication with God, but neither they nor their physicians considered it particularly relevant to distinguish between hearing the voice of God, seeing him appear, and/or feeling his presence and will.

Toward the end of the nineteenth century, however, diagnostic language grew increasingly precise and standardised, both in asylum casebooks and in published literature. And today, the major diagnostic manuals, DSM-5 and ICD-10, strongly encourage clinicians to distinguish between falsely believing that someone or something is forcing a person to act in a certain way, and hearing a voice telling them to do so. However, as a recent study on the phenomenology of auditory hallucinations carried out as part of Hearing the Voice suggests (Woods et al, 2015), when people talk about their own lived experience of hearing voices, the distinction between ‘false’ perceptions and sensory experiences is not always clear and unequivocal. This appears to chime with, for instance, Fletcher and Frith’s (2008) approach to psychosis which draws on a Baysian model of cognitive processing to argue that false perception and false sensory experience have their basis in the same ‘cognitive abnormality’.

My research on the two psychiatric divisions briefly described here – between affective and cognitive disorders and between delusions and hallucinations – takes these concepts to be historical events emerging in a particular context rather than timeless, universal categories. This is not to suggest that they are not ‘real’. Psychiatric categories are intended to help us understand, explain, and address complex and often distressing phenomena, but it is important to note that such categories are subject to renegotiation over time, and as scholars in the history, anthropology, and sociology of medicine have shown (see e.g. Hacking 1995a, 1995b, 2007; Young 1995; Millard 2015), when we transform the language and conceptual frameworks for explaining human experience, we also transform the possibilities and limits of what can be experienced.

An historical approach to psychiatric classification can show us how current categories came into being through a multitude of different acts and events beyond mere ‘discovery’ (such as convenience, and institutional and professional politics). If we accept that present knowledge is not inevitable, but the result of specific historical processes, the implication is that the future holds the possibility of a range of new and different approaches and ways of experience, including beyond the realm of modern medical knowledge. My hope is that by demonstrating the historical specificity of current psychiatric knowledge about the categories discussed here, this project will contribute to a more dynamic, flexible, and person-centred approach to the ways in which different mental phenomena are understood and explained, one which allows for multiple explanations that do not necessarily label ‘unreal’ mental phenomena as symptoms of pathology.

This project is very much a work in progress and I would love to hear your thoughts! Please share any comments, questions, or criticisms below, or drop me an email.

Dr Åsa Jansson is a COFUND Junior Research Fellow with Hearing the Voice and the Centre for Medical Humanities at Durham University. More information about her past and current work can be found here.

Conolly J (1846) Clinical lectures on the principal forms of insanity, delivered in the Middlesex lunatic-asylum at Hanwell: Lecture XVII, The Lancet. May 23: 565-568.

Hacking, I (1995b) Rewriting the Soul: Multiple Personality and the Sciences of Memory. Princeton, NJ: Princeton University Press.

Millard C (2015) A History of Self-Harm in Britain: A Genealogy of Cutting and Overdosing. Baskingstoke, Hampshire: Palgrave Macmillan.