‘What does your inner voice sound like?’ by Jennifer Hodgson 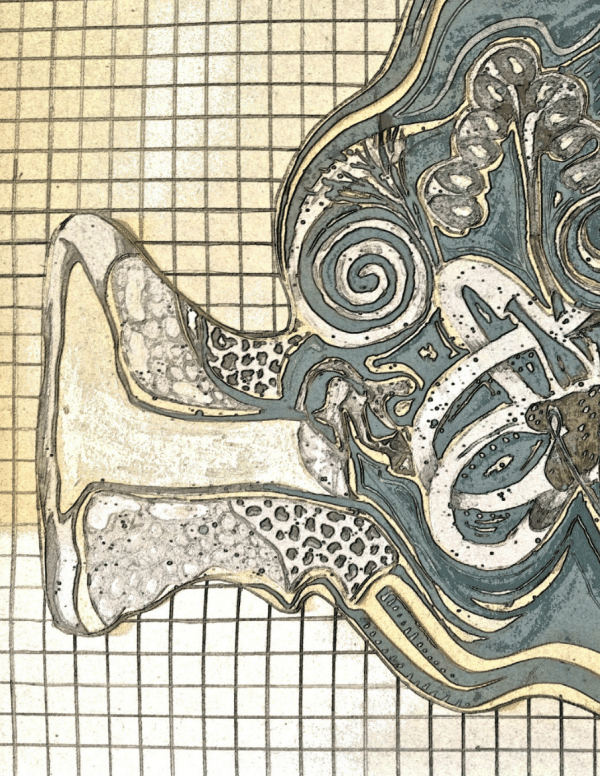 Try it for yourself: stop what you’re doing and try to listen in to the mind’s ear. What can you hear? Indeed, are you hearing at all? Can you say, definitively, that your inner voice sounds in the sense that we usually understand it? If not, how are you perceiving what it is that you’re experiencing? Now try to describe this inner voice. Are you able to put into words what it feels like to “tune in” to the voice you hear in your head – if, indeed, you are hearing it at all?

If you’re having trouble, you’re in excellent company. The poet and critic Denise Riley describes the process of “tuning in” to the inner voice like this:

If I swing my attention onto my inner speech, I’m aware of it sounding in a very thin version of my own tone of voice. I catch myself in its silent sound, a paradox audible only to me. We don’t, though, seem to have much of a vocabulary, an odd lack, for this everyday sensation. On what, then, does my conviction of the tonality of my inward voice depend? Do I have a sort of inner ear designed to pick up this voice which owns nothing by way of articulation? For I can detect my usual accents and the timbre of my voice as soon as I try to overhear myself by trapping the faint sonority of my inner words. But they are audible, if that’s the adjective, only in a depleted form which keeps some faint colouration but is far less resonant in the ear than when I’m speaking aloud… It’s as if an inner ear is alert to my inner voice, although what happens isn’t exactly an instance of hearing my own voice speaking. So when I think I can overhear my own inner speech, what do I mean? […] Is it more of an ear-voice, which detects it at the same time as it issues it? But I do have the feeling of hearing something, in the same way that I can run a tune audibly through my head, yet without humming it even silently. Or I want to say that I “hear” it; there’s not an exact verb for this peculiar kind of hearing something which isn’t actually sounded, and which evades any measurement of articulation. Yet a kind of hearing it surely is.

The inner voice is a very common aspect of most of our lives. Although a small minority of people claim never to experience it, the vast majority of us are very familiar with the clamour of voices that make up the mind’s chatter. At any one time, that voice may be distinctly your own: rehearsing a dreaded talk with your boss, or chastising yourself for forgetting an important appointment. But you might just as easily recognise it as the voice of a parent, a celebrity, an old friend or a much-loved schoolteacher. Such self-talk is an example of what philosophers and psychologists call “mental imagery”, an experience which resembles a perceptual experience but lacks any source of sensory input. As Riley comments in the quote above, despite our familiarity with what we might call “hearing in the head”, there are far more ways of talking about visual experiences of this kind than there are auditory ones – hence why we use the term “imagery” to denote the broad gamut of “quasi-sensory” experiences that occur in our minds.

We talk of “picturing in our mind’s eye” for example, or of “visualising”, or of “having an image in our head”. But beyond the auditory experiences with which we are specifically concerned here, it is very likely that similar experiences in other sensory modes (or, indeed, combinations thereof) are just as common: motor imagery, haptic imagery and olfactory imagery, for example.

This notion that we far more commonly speak of what we see with our mind’s eye than of what we hear with our mind’s ear provided the jumping off point for last week’s meeting of the Hearing the Voice project’s Voice Club. Sam Wilkinson provided a philosophical take on the ways in which perceptual imagery of this kind can constitute and enhance our thinking, whilst Patricia Waugh turned to literary representations of mental imagery in the work of Proust, Woolf and Henry Green. (You can read more about Voice Club here.)

Pinning down precisely the nature and function of auditory mental imagery has long been the subject of debates amongst philosophers, psychologists and cognitive neuroscientists. And this challenge of knowing what we mean when we talk about our inner voices also arose during our interviews with writers at the Edinburgh International Book Festival last year. We asked them the same questions we posed to you at the top of this blog post. And it seems that describing exactly what their inner voices sounded like (if indeed they sounded at all) and how it felt to experience them taxed even veteran writer’s well-honed powers of description.

Here’s a sample of their responses:

This writer doubts whether the “thought voice” is verbal at all. Perhaps, they ponder, the content of the mind only becomes encased in words when we attend to it:

1. I think it’s just a thought voice.  A voice of thought; it’s not a voice of words.  I suppose, when you pay attention to it, I suppose it’s a bit like mediation in a way, you focus on something.  You focus and then the words come.  So it’s almost like the old days when you used to develop photographs in a dark room and the image would emerge, it’s like that.

This one insists that in general they don’t have an inner voice, but then modifies their first comment to explain that their inner voice is not a discordant one. They also describe “hearing” the voices of their loved ones:

2. I don’t have an inner voice. My inner voice is not at all different from my outer voice. I don’t spend a lot of time thinking x and saying y. I will occasionally hear the voice of one of my late parents, or a teacher I was very close to.

For this writer, the inner voice “doesn’t sound like anything”. Its quality seems to lie somewhere between “hearing” and “seeing”:

This writer invokes the observer effect to describe why the inner voice is so elusive:

4. Does it speak in complete sentences?  I have no idea… I never even think about it. And even now I couldn’t tell you, even though I’ve been asked the question because I think thinking about it changes it.  So, I can’t say.

And finally, this writer describes the kind of inner voice that is probably familiar to many of us:

5. I don’t know… It is a really hard question to answer.  I mean I have a really rich inner life all the time… I think the days that I just don’t ever talk to myself are kind of wasted days… I am talking to myself all the time, and sometimes all that mundane stuff, just I have to check my email or I wonder are the kids up, or what time does Tesco close, you know.

To find out more about the Writers’ Inner Voices Study, please click here.

This blog post was initially published on 13 May 2015 on our sister blog, Writers’ Inner Voices.
‘Inner Ear’ illustrations by Mary Robson.