What would it take to ‘transform’ early psychosis services? Public Lecture from Nev Jones (24 January)

On 24 January 2019 Nev Jones PhD (University of Florida) will be speaking on ‘What will it take to ‘transform’ early psychosis services? On the entanglements of phenomenology, social and cultural identity and structural disadvantage in early intervention’. All are welcome to this free lecture, which will take place at St Chad’s College (Durham University) from 5-7PM. Refreshments will be provided.

Roughly 25 years on, the field of early intervention has been described as both “paradigm shifting” and still limited in its capacity to grapple with the consequences of deeper structural forces (including systemic racism and poverty/austerity) as well as the challenges inherent in any attempted shift from an individualistic clinico-medical framework to a more robustly ecological intervention approach.  This presentation will draw on multi-site mixed methods research spanning the phenomenology of voices and related experiences, and the social and clinical impact of childhood trauma, structural adversity, and minority race/ethnicity, in order to trace some of the contemporary faultlines of early intervention practice,  and highlight both opportunities for and exemplars of ‘transformed’ practice.

Nev Jones is an assistant professor of mental health law and policy at the University of South Florida, affiliate faculty of the Louis de la Parte Florida Mental Health Institute and (affiliate) clinical assistant professor of psychiatry at the Yale University School of Medicine. A community psychologist by training, her work has spanned critical perspectives on the sociopolitics of psychiatric discourse, the phenomenology of psychosis, and the social and cultural determinants of mental health, disability and healing. The majority of Nev’s current research focuses on early intervention in psychosis and she also works as a consultant-trainer at the OnTrack early intervention in psychosis model training hub. Prior to moving into psychology, she studied continental philosophy for 8 years, including as a Japanese Ministry of Science and Education postgraduate fellow in philosophy at the Nanzan Institute for Religion and Culture in Nagoya. 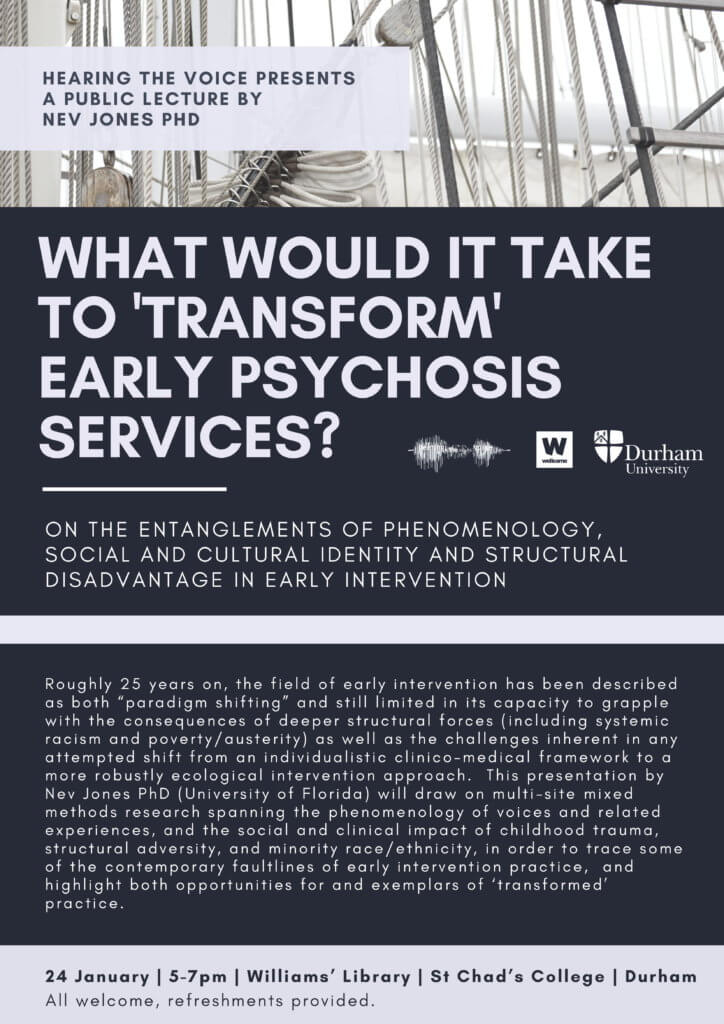