Stranger things: how our expectations do (and don’t) shape what we hear

From time to time, all of us are likely to have an experience of seeing or hearing something and then finding that other people don’t share the experience. It’s quite common to think about those experiences as being a bit unusual – maybe like a hallucination, or an illusion – but actually these “individual differences” in perception can be quite common.

One thing that makes a big difference is expectation: how our expectations shape what we hear and see is a big topic in psychology right now. A good example of this is the “Brainstorm/Green Needle” clip:

In this example, most people can here both brainstorm and green needle depending on what they think about hearing – although some people can only hear one, or tend to hear something in between. It has been suggested that both ‘brainstorm’ and ‘green needle’ have similar frequencies so the brain is forced to take a best “best guess” at what is being heard. That “best guess” is thought to involve our brains building an internal model or simulation based on the language we know, and then using it work out what we are hearing. 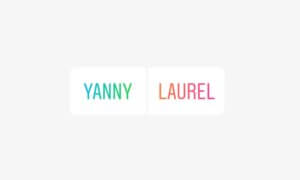 But expectation can’t do everything. Expectation does not really shape what we hear in another recent example: ‘Yanny or Laurel’. Polls across the Internet suggesting approximately 50% of people hear Yanny and 50% of people hear Laurel, with a very small percentage of people can hear both. This may be due to differences in the frequencies that can be heard by different people. But we can’t easily choose to hear one or the other, however strong our expectation.

Why does it matter?

Understanding the differences in how people perceive the world is really important – for understanding more about how the mind works, but also for understanding more “unusual” experiences. For example, it has been claimed that expectation might play a role in why and how people hear voices that other people cannot hear. A key question, though, is where differences in perception come from: why are some people stuck on “brain needle”, and other people able to change what they hear at will?

One idea could be that some people are more imaginative and creative from an early age. For example, some researchers have suggested that having a childhood imaginary companion (IC) may be related to differences in perception. This was demonstrated in one study reporting that 4-8 year olds with ICs appear to be better at detecting words in jumbled speech sounds than those without ICs (Fernyhough et al, 2007). Other research has also found that children with ICs tend to score higher on measures of creativity than those without ICs (Hoff, 2005) which might also be playing a role in hearing or seeing something that others can’t (Rominger, Fink, Weiss, Bosch & Papousek, 2017). Another approach is to think about life experiences that shape our perception. For example, stress and adversity in childhood is often linked to hearing voices in some way (e.g. Kilcommons et al, 2008). If so, it could be that expectation plays a different or more influential role for people who had more exposure to adversity in their life.

There is much to explore in terms of different factors that might influence differences in perception. We are currently running a project to investigate some of these issues. If you are keen to help, we are looking for individuals over the age of 18 to participate in a study at Durham University lasting 40 minutes. We are particularly interested in hearing from people who had an imaginary friend in the past. Each participant will receive a £7.50 Amazon voucher for taking part.

If you have any further questions, or wish to participate in this study, please feel free to contact Sophie Denton, Yi Ting Leong or the project supervisor Dr Ben Alderson-Day.