Exploring the Diversity of Consciousness (8-9 December 2017)

David Dupuis, a post-doctoral research fellow with Hearing the Voice, has co-organised an exciting workshop on the diversity of consciousness on 8 and 9 December 2017. This two-day event has been co-ordinated by the ALIUS research group, and will be taking place in Paris.

Drawing on his research with Hearing the Voice, David himself will be speaking on ‘The whispers of the selva: An anthropological approach to the nodes of induction, socialization and control of auditivo-verbal hallucinations in the context of Peruvian Mestizo shamanism’ at 11:35AM on Friday 8 December.

For those unable to attend in person, the entire workshop (including David’s talk) will be livestreamed here. 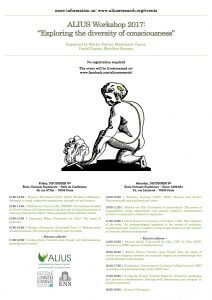