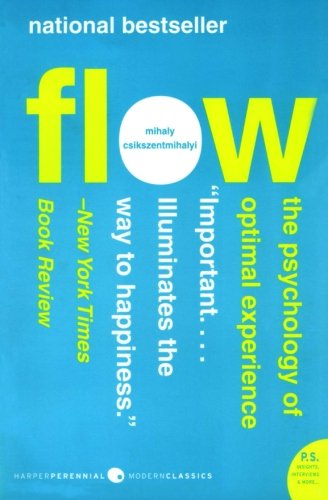 Flow is that pleasurable state of complete absorption in the task at hand. It’s a kind of deep focus, where all else falls away, the mind stops its wondering, and you become fully engaged in what you are doing. Time flies when you’re experiencing flow; other concerns – even bodily needs – lapse, self-consciousness breaks and every thought and action seems to unfurl effortlessly, one after the other.

Sportspeople refer to it as being “in the zone”, characterising the experience as one of optimum athletic performance: a string of perfect passes, or the uncanny ability to find oneself in exactly the right place at the right time on the sports field. But such experiences are not only confined to athletic endeavour.

For the psychologist Mihaly Csikszentmihalyi, who coined the term in the 1970s to flow describes an experience that has existed under various names throughout history, flow is universal and a crucial part of human happiness. Anyone can experience flow, he argues, given a task that is sufficiently engaging – challenging but still just about achievable. Most of us will have had experiences of flow, be it whilst running, dancing, playing chess, reading or being engrossed in our work.

Flow is intimately associated with the creative process. Of course, the stereotype of the otherworldly ‘creative genius’, oblivious to all but their muse, is a familiar one. But describing exactly how it feels to experience flow is a trickier matter. During it, our sense of self-awareness is lost and when it stops, it can be difficult to reconstitute exactly how it felt. With this in mind, who better to ask what flow feels like than a group of people well-versed in putting into words those aspects of our experience that seem to defy easy description: writers.

Here are comments on what it feels like to experience flow from several of the authors taking part in our study:

This writer reports feeling at once lost in the task of writing but also very much ‘present’ and ‘grounded’:

For me, it always feels completely normal… I don’t mean it’s coming out all perfect and everything’s all wonderful, you know, there’s stuff there and it’s coming out, and I’m in that presence and I’m in that character. It feels a very present thing to be and to do… There’s the consciousness, there’s this thing that you’re in it and you’re doing it, and in one sense you’re lost in it, but in the other sense it’s entirely, there’s a consciousness… You don’t feel, for example, kind of spaced out in any way, or that sort of a thing, I always feel really quite grounded. In fact, you know, very, in my own body actually.

This one speaks of the loss of self-awareness:

This writer describes the experience of flow as like donning ‘mental blinkers’:

It’s like being somewhere else… It’s almost as if somebody puts blinkers on me, sort of mental blinkers, and I am watching what’s going on.

This one uses music to try to create the optimum conditions for flow. They know they’ve experienced it when the songs have changed and they haven’t noticed:

Well sometimes you sit with a piece of paper and nothing comes, and nothing comes and nothing comes. And then if there’s a bit of a breakthrough… and suddenly you forget you’re writing. I always have music on in the background when I’m writing, and I’ve purposely got a stereo that I can get three of four CDs in at one, and spend half the morning choosing what order they come in. But if I press play at the beginning and then it goes through and I haven’t noticed the changing of songs, I haven’t noticed the changing of CDs, and suddenly it’s silence in the room, and I’ve produced a couple of pages, then that’s when yes this has worked. It’s flowing, it doesn’t feel like hard work, it doesn’t feel like a struggle.

This writer reports not feeling conscious of bodily needs or time during flow. And interestingly also comments that flow brings with it a kind of optimum creativity:

It’s very hard to know because you do go into a sort of zone when you’re not really terribly conscious of what you’re doing. You don’t feel hunger, you don’t feel thirst, you don’t know what time it is, and you’re in that zone and something’s triggered it off. And that might take weeks, it might take years, and when it happens (clicks fingers), it flows, and the best poems actually need very little revision.

Finally, this writer speaks of the pleasures of flow – and how it motivates them to embark on the difficult task of writing:

There are times when I get into flow, that wonderful feeling, and I think that must be the motivator. Sometimes it feels like a hard slog, it’s like going out for a run or something. I want to drool in front of the television; I’m too tired, blah, blah, blah. But once you get into it, it’s intrinsically satisfying.

So every time you sit down to write, there is a possibility that it’s going to give up its magic to you. Now it doesn’t always, but you always know there’s a possibility there that it will.

This post was first published on our sister blog Writers’ Inner Voices on 21 July 2015.