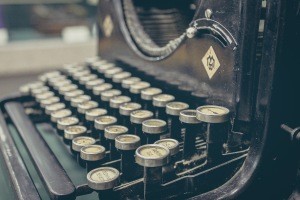 Readers of this blog will be familiar with our Writers’ Inner Voices study – a qualitative study of literary creativity conducted in partnership with the Edinburgh International Book Festival and designed to explore the complex ways in which writers experience the presence, agency and voices of the characters they create.

Our study focuses specifically on written fiction, but similar questions might also be asked about other forms of writing, such as writing for television or radio.  How do scriptwriters for TV and radio hear the voices of their characters? Do the characters arrive in the scriptwriter’s mind fully formed, so that the writer merely serves a conduit for voices that appear to have ‘lives of their own’? Or do they have to work at hearing the voices of the characters they create?  And how are the experiences of TV and radio script writers different from those of novelists?

In a recent BBC Academy podcast, one of the lead researchers on the Writers’ Inner Voices project, Dr Jennifer Hodgson, joins Sarah Phelps and Al Smith in order to discuss precisely these issues.  They consider ‘what it is like to hear characters, whether there is a difference between creating characters for television, radio and written fiction and the practicalities of script writing.’

You can download and listen to the podcast here.

Sarah Phelps has written scripts for EastEnders, TV adaptations of Oliver Twist and Great Expectations, and also wrote the World War I drama The Crimson Field and adapted JK Rowling’s The Casual Vacancy for BBC One.

Al Smith is a television and radio scriptwriter.  He has written for East Enders and Holby City and also co-created the teen drama The Cut for BBC Two.  He also wrote Life in the Freezer and The Postman of Good Hope for BBC Radio 4.

Dr Jennifer Hodgson is one of the lead researchers on Hearing the Voice’s Writers’ Inner Voices project.  She holds a PhD in English Studies from Durham University.

The podcast is presented by BBC Academy producer Helen Hutchinson.