Composer and researcher Jonathan Berger presents the seventh annual Music and Brain Symposium on Saturday, April 13, 10 AM – 6PM, at Stanford University (Stanford, CA). Berger is the Denning Family Provostial Professor in Music at Stanford, and is co-director of the Stanford Institute for Creativity and the Arts (SICA) and The Center for Computer Research in Music and Acoustics (CCRMA).

The 2013 symposium, “Hearing Voices,” brings together some of the most exciting researchers, scholars, and writers in the field to examine the phenomena of auditory hallucinations. Presenters include Tanya Luhrmann (Stanford University), author of When God Talks Back; Paul Watson, Pulitzer Prize-winning photojournalist upon whose experience The War Reporter is based; Dan O’Brien, librettist, playwright, and author; Daniel B. Smith (The College of New Rochelle), author of “Muses, Madmen, and Prophets”; Judith Ford (University of California, San Francisco), speaking on The Phenomenology of Auditory Verbal Hallucinations (AVH); Diana Deutsch (University of California, San Diego), presenting The Phenomenology of Musical Hallucinations; Angela Woods (Durham University), speaking on Taxonomies of Voice-Hearing; Chris Chafe (Stanford University), presenting The Acoustics of Imaginary Sound; and Shaili Jain (Stanford University) addressing hallucinations in veterans with PTSD.

The Symposium takes place at Stanford’s Center for Computer Research in Music and Acoustics (CCRMA). More information is here. The symposium will be livestreamed here  http://www.ustream.tv/channel/13876337 and will use the hashtag #HearingVoices. Please join the conversation! 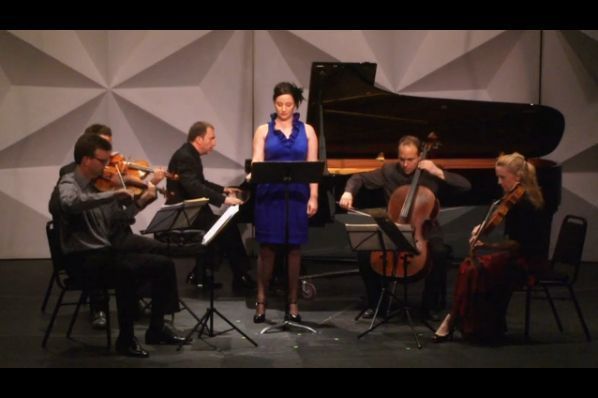 The War Reporter and Theotokia present the stories of two men, each haunted by inner voices. Ambisonic electroacoustic soundscapes created at CCRMA transform the intimate, vineyard-style Bing Concert Hall by virtually placing the audience inside the brain of the protagonists. While on stage, their inner-voices – painful, poignant, sardonic and revelatory – come boldly and dramatically to life.

THEOTOKIA (world premiere, full version) takes the audience inside the consciousness of a man who, beset by hallucinatory voices, is taunted and seduced by the mother of god. Illuminating the experience of one possessed by ritualistic and religious hallucinatory delusions, the work portrays the inner struggle of mental illness in a rich musical, dramatic, and philosophical counterpoint.

THE WAR REPORTER (world premiere) depicts the true story of Pulitzer Prize-winning combat journalist Paul Watson, as he seeks to rid himself of the haunting voice of an American soldier whose corpse he photographed in the streets of Mogadishu in 1993. Librettist Dan O’Brien’s interviews with Watson are the primary source for the work.