‘Coping Strategies for Living with Voices’ by Roz Austin 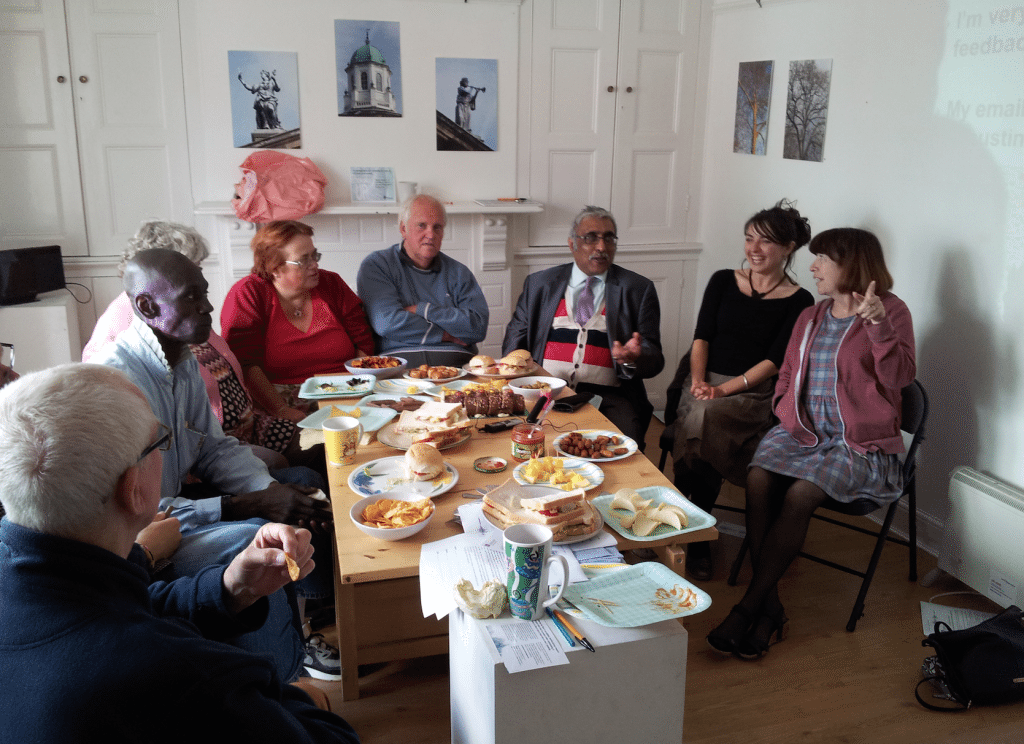 Roz Austin, a doctoral student in Durham’s Centre for Medical Humanities and Department of Geography, who is also part of the ‘Hearing the Voice’ research team, reflects here on the Focus Group which she led in Oxford in May 2015, when she shared with participants the interim findings of her Ph.D. research.

My Ph.D. thesis is a novel piece of research at the boundaries between geography and medical humanities. It investigates whether voice-hearers connect their voices with adverse life experiences from childhood or adulthood. In an earlier Blog-post I look at the impact of stigma on voice-hearers, and this one instead focuses on the discussion of creative strategies.

The participants in my Focus Group felt encouraged that there can be ‘improvement’ in how voice-hearers are able to cope with their voices. A decision was taken by the group that I would highlight this aspect of the discussion in the Blog-post.

Amara said that voice-hearers receive support from being able to share their experience with other voice-hearers, because this way they feel less isolated. Katie, a mental health professional, added that there can be ‘a lot of reluctance to do that because of fear of judgements’, which is why the Unusual Experiences support group that we have established in Oxford helps because it provides ‘a safe space’. It is a support group for people with psychosis, where they can discuss voices, visions or unusual or distressing beliefs. (The link to details of this meeting is here.) The Hearing Voices Network has established hearing voices groups across the United Kingdom (and in other countries), where voice-hearers can talk openly about voices and strategies for coping with voices. However, there is no pressure to share experience, and a voice-hearer is welcome to come and listen. For some voice-hearers it takes a while to gain the confidence to talk about voices. The groups offer an opportunity for voice-hearers to participate and to feel that there is no hierarchy between the participants and the facilitators of the group. The participants in the focus group recognised that it was important to challenge social isolation and to find ways of connecting with others.

Simon reflected that ‘coping strategies are very varied’. He said that his ‘voices were bullying me, coz I didn’t ask them to come along. So I rejected them all’. He refused to enter into a dialogue with the voices, whereas Tumelo has found it helpful to ‘sit and listen in a quiet room’ to what the voices are saying to him. He said ‘I don’t necessarily listen to them’ if they are being negative and critical. Katie reflected that voice-dialogue allows people to ‘identify what they think that voice is leading them to hear, and to work with it as you might work with another person that you’ve got a difficult relationship with, opening a dialogue with that person almost’. This may mean speaking directly to the voice, and listening to its replies. For Tumelo, it was helpful for him to recognise that the voice ‘I’m experiencing is part of me and it’s something that I have to work with myself to go forwards’.

For those voice-hearers who are too overwhelmed by the content or tone of their voices, listening to music on headphones can be a helpful distraction strategy.

Another coping strategy Amara remarked was to keep busy, and to focus on meaningful activities. It also helped to have a routine in place.

Creative work was also seen as a therapeutic strategy for coping with voices. Paul said that ‘I love drawing faces’, because ‘if I put a face to what’s going on in my head then it’s out there’. The faces are not those of the characters that he hears speaking to him, but are faces that he is interested in. Rachel also uses art to express herself, and said that she ‘painted and drew all through my episodes’ of psychosis. She said that ‘everything I painted was connected to the voices’, and one example that she gave was of the emotions that she associated with ‘the voices […] morphing into sort of trees’. Rachel believes that voice-hearing can mean that one’s identity is confused, and that ‘if you’re creative yourself you’ve kind of got an identity’. In this way, art can provide ‘an anchor’. Some of the voice-hearers preferred a written medium. For example, Simon wrote poetry to express the difficult emotions that he links to hearing aggressive, critical voices.

A couple of participants in the group stressed that recovery is a unique path for each individual. Tumelo also said that mental illness should be seen as something ‘that could happen to anybody at any stage of life and that it’s not an isolated event’. That said, several of the participants felt that they had become ‘unwell’, and reflected that their breakdown led to them enduring a number of significant losses, such as losing a job, a home, and/or good friends. It has been challenging for voice-hearers to rebuild their lives in a way where they feel that they are fulfilled and have self-esteem.

Several of the participants felt that psychological therapy was crucial to their recovery. Tumelo and Amara who were both men from black and minority ethnic (BAME) backgrounds had not been offered therapy for several years, and they felt that this delay was related to their BAME ethnicity, and that this was unfair discrimination. Amara said that more BAME people are being detained in psychiatric hospitals, where they are more likely to be ‘forcibly medicated and sectioned and all the rest of it, and less likely to be offered alternative therapy’. Tumelo said that he relied upon conversations with fellow patients as a substitute for therapy. He remarked: ‘We used to get all our therapy in a smoking room’ inside the psychiatric hospital. Tumelo reflected that ‘I’ve seen people who I’ve known to be really seriously ill, unable to communicate, interact’, which would suggest that help is sometimes needed to enable the person to connect with others again. For Simon who was offered therapy after many years, this was a turning-point in his recovery. He said ‘about eight years ago I met a guy [a psychologist], he sat me down and talked to me […] That’s what you need. You need someone to talk to you’. This stresses again how it is helpful for a voice-hearer to share their experiences.

Rachel has noticed ‘a dramatic change over the past ten years, where ‘a lot more’s been done in the hospitals and by Mind, and also by ex-service-users, to increase awareness’ of mental distress and how this affects people. Tumelo also thinks that inpatient psychiatric services have improved, because staff now relate to patients in a kinder way, and patients have more rights. It was clear that the participants in my focus group think that some good changes in mental health services have happened, but that more change is needed, so that service-users feel supported to live well with voices. Jane, a peer supporter who also has lived experience, commented that ‘people with mental health problems are brave and courageous. It’s a lot harder for most people to live a normal life’. This is why it makes sense for people to feel supported to find strategies for coping with voices. The emphasis was on people coping by themselves. For some voice-hearers ‘peer’ groups had offered valuable support, which helped them to change the relationship to the voices that they hear. Some of the voice-hearers found it unhelpful when they experienced loneliness, or occupied quiet spaces, as this intensified the voices. The focus group and my research show us that coping strategies range hugely from individual to individual, just as the character of the voices do. For example, a voice-hearer might hear voices that are old or young, female or male, familiar or unfamiliar. By dialoguing with the voice/s the voice-hearer recognises a pattern to these experiences, and can devise strategies for addressing the voice so that the voice becomes less dominant or threatening. By setting boundaries with the voice/s. the voice-hearer hopefully feels empowered and can continue with work or interests that give them self-respect and fulfilment.