‘Voice-hearing and Trauma: Considering the Impact of Stigma’ by Roz Austin 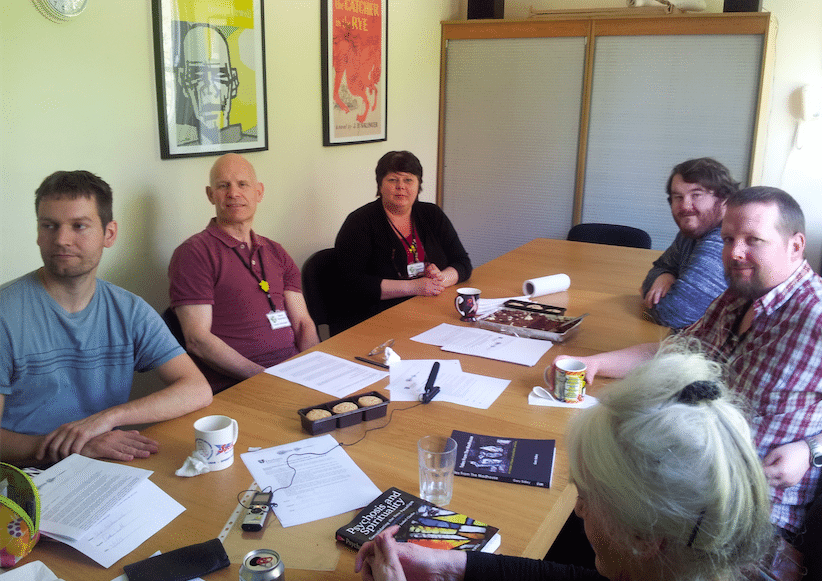 Roz Austin, a doctoral student in Durham’s Centre for Medical Humanities and Department of Geography, who is also part of the ‘Hearing the Voice’ research team, reflects here on the Focus Group which she led in April 2015, when she shared with participants the interim findings of her Ph.D. research. She also provides an account of the staff training session with a mental health centre in the North-East in May 2015, which involved her receiving feedback on her research.

My Ph.D. thesis is a novel piece of research at the boundaries between geography and the medical humanities which aims to provide insights into the creative and affective strategies of voice-hearers for living with voices. I am exploring how voice-hearing affects them emotionally, and if emotions become part of the developmental story in terms of how the voice-hearer conceptualises their voices. I am also investigating whether the voice-hearer connects their voices with adverse life experiences from childhood or adulthood.

Engagement with voice-hearers is central to the ‘Hearing the Voice’ research project. Each month the project holds a Joint Special Interest Group in Psychosis, when service-users are invited to share their experiences with a wider audience that includes mental health professionals and academic researchers. In July 2014, the ‘Hearing the Voice’ project ran Voice Walks at the Shuffle Festival in London, when five voice-hearers, including myself, shared their thoughts on how stigma has affected them, and how they have found a way to recover, so that they can live with their voices. In April I attended the ‘Mind the Gap’ mental health conference at Newcastle University, that was hosted by undergraduate students, where the ‘Hearing the Voice’ project had a stall next to the ‘Time to Change’ anti-stigma campaign. Students were pleased that voice-hearing and psychosis were being researched and talked about more openly, as there is often fear and reluctance in society to talk about these topics.

At the start of my research, I was mindful that my own position of being a voice-hearer meant that I wished to make voice-hearers’ perspectives central to my research. I have interviewed thirty voice-hearers as part of my doctoral research, and undertaken six months of participant-observation research in two mental health centres in Durham and Oxford. Subsequently, I have undertaken five months of analysis of the data, and the purpose of the Focus Group was to present the findings to the participants. Therefore, the participants would have the opportunity to comment and reflect on these interim findings, so that voice-hearers could shape my formulations before I start to write my thesis in June. Given that my research is confidential, I have referred to people in this Blog-post with pseudonyms to protect their anonymity.

The voice-hearers in my Focus Group felt encouraged that a connection was now being made in many cases between voice-hearing and traumatic life events. This link took voice-hearing away from a purely biomedical paradigm, and helped people to understand that voice-hearing could be a reaction to adverse life experiences, including trauma. I was struck by how people turned to stigma when I presented my findings, even when I was not explicitly talking about this. Voice-hearers said that they had experienced stigma both in the workplace and from members of the community. This stigma impacted negatively on how they viewed themselves, and often this was not helped by the fact that many of these people felt stigmatised by receiving a psychiatric diagnosis, such as schizophrenia.

While my doctoral thesis does not directly focus on the issue of stigma, the concerns that participants raised about stigma in the Focus Group mean that I am addressing this issue here. Sarah, who is a retired teacher, said that hearing voices for her meant ‘being in an alternative reality…I was not part of this world. I could not tell anyone I was frightened, I would frighten them’. For many of the voice-hearers, the fear and stigma which surrounds voice-hearing, meant that they were reluctant to seek help when they first heard voices. Sarah had found that she received support from fellow service-users, when she shared her experience with them in the setting of voluntary work. She said: ‘I’ve always leaned toward people with similar experience, because I could talk to them’. Sarah pointed out that it is ‘by bringing voice-hearing out in to the open’, that we are ‘tackling stigma and discrimination’. However, she noted that this was often problematic for younger people, who were of working age, given the stigma that exists in the community. The potential fallout of stigma meant that these people often could not risk disclosure.

Phil, who had worked for many years in the health sector, reflected that stigma can be a real concern for those with mental health issues who work in this field. He said that after a period of sick leave, upon his return to work he was ‘treated differently by his colleagues’. For example, he noticed that he was not given the same level of responsibility, with even his role of mentoring students now being assigned to colleagues. Sarah recently attended a conference at Durham University for nurses – ‘The challenges of being a mental health nurse’ – where nursing practices that have a mainly biomedical focus were critiqued. Sarah said that the nurses were mindful that they were ‘trying to change their way of looking, and be less stigmatising of themselves within their profession, towards people in hospital’. Several participants agreed that there is stigma within the mental health profession towards voice-hearers. As Phil noted, unless the NHS implements “reasonable adjustments” for its staff who have mental health issues so that they can retain their jobs, they cannot expect employers in the wider community to make “reasonable adjustments”.

Angela Slater, who works for the Time to Change anti-stigma Government campaign, said that ‘you’ve got the external stigma, but also it impacts massively on how you view voice-hearing’: that is, on whether ‘ you view it as a gift, or something benign, something positive, or if you believe that voice-hearing makes that person mad’. Angela pointed out that ‘if you think enough times about something you start internalising at some level, don’t you?’ Nearly all of the participants in my study reported experiencing external stigma from former employers, or family members, or people in the community. This was rendered more problematic by the fact that most of the participants whom I interviewed reported experiencing adverse life events or trauma that they connected to the onset of their voice-hearing experiences. Angela noted that in her anti-stigma work with service-users she had become aware that ‘what one person would experience as traumatic, somebody else wouldn’t’. She said that ‘someone might deal with bullying really well, and another person might experience it as trauma because it really impacts on how they perceive the world, how they perceive themselves’.

Bullying was one stressor that participants in my study reported. Other difficult life events or traumas that the participants reported previously experiencing included sexual abuse or physical abuse, bereavement of a loved one, major physical illness, or migrating to a new country. Sarah asked in the focus group ‘how well recognised do you think the link is between psychosis and trauma?’ The interim findings of my thesis show that the majority of voice-hearers make connections between difficult life events and voice-hearing. A central finding has been the tendency of voice-hearers to suppress, deny or downplay their emotions. For those who have experienced complex trauma, the findings would suggest that talking about emotions helps to reduce the frequency and intensity of voice-hearing experiences.

Nonetheless, the stigma that surrounds voice-hearing means that often voice-hearers will not seek help. For example, Mary delayed seeking help for two years, and yet she found that three years of therapy from a Complex Needs programme was the turning-point in her recovery. Joanne found it helpful that the Early Intervention Service arranged for her to have sessions with a clinical psychologist, who taught her cognitive strategies for coping with her voices. One of these strategies was to only talk to her voices for one hour each day. When the voices were unkind to her, she listened to the voices for less time.

I have found in my engagement with different stakeholders, such as voice-hearers and service-users, and mental health professionals, that this has transformed my own thinking about the phenomenon of voice-hearing. I have found that voices are unique for each voice-hearer in the sense that each person experiences different voices. They can hear voices that are male or female, old or young, familiar or unfamiliar. During the Focus Group in Durham, the Assistant Manager said that I had changed her own understanding of voice-hearing, as I had said that most people could relate to the experience of hearing their name being called in the absence of an external source. This is itself a voice-hearing experience. The Assistant Manager said that this helped her to place voice-hearing on a spectrum of common human experience, so that this was more normalised. Both the Assistant Manager and the Manager and the service-users have now established a discussion group in the mental health centre that meets once a month, which gives voice-hearers a forum where they can talk about their voice-hearing experiences. Voice-hearers said that they found it very helpful to meet one another at the Focus Group, as this enabled them to realise that there were others who also heard voices, and may connect their voice-hearing to difficult life events. Many had found it useful to connect voice-hearing to difficult life experiences or trauma, as opposed to looking at this phenomenon as a purely biomedical condition. This was not the case for all voice-hearers. I have found it fascinating to discover that there are several different interpretations of voice-hearing available, and that it is important to remain open-minded, because often how the person conceptualises voice-hearing depends on their life experience.