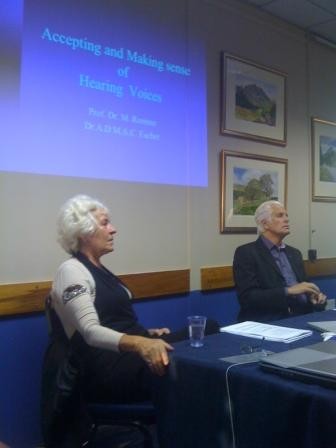 Professor Marius Romme and Dr Sandra Escher are visiting Durham as fellows of the Institute of Advanced Study, associated with our work on Hearing the Voice. Last night, to a packed audience of around 200 people, they gave an inspiring public lecture on the topic Accepting and Making Sense of Hearing Voices; an introduction to their twenty-five years of research into voice-hearing.

It would be too great a challenge to summarise the ideas so eloquently introduced in this double presentation, so here instead are some of the highlights:

Marius’ outlined four core concepts in accepting and making sense of voices: (1) hearing voices is not a sign of mental illness but points to other life problems; (2) there are more healthy voice-hearers than patients (i.e. more people hear voices in absence, rather than presence, of a psychiatric diagnosis); (3) people who hear voices become patients or service-users because they are not able to cope with distress, including the distress of voice-hearing; and (4) the characteristics of the voices refer to what has happened to the hearer and his or her problems. 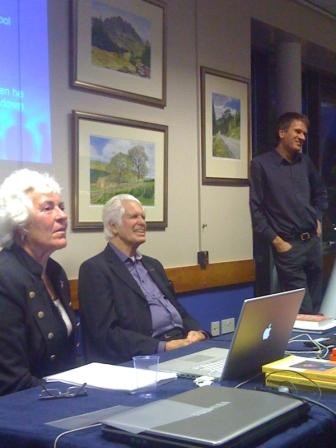 These points were expanded and elucidated through descriptions of their empirical research. And, Sandra went on to explain, they apply equally to the case of children. Presenting findings from her three-year longitudinal study of children who hear voices, Sandra suggested that while there was no measurable difference in the experience itself, the children who had become psychiatric patients before or during the course of her study were more likely (than children without a psychiatric diagnosis): to have more triggers for their voices, to have experienced greater childhood anxiety and depression, to have more frequently a negative emotional appraisal of their voices, to find their emotions and behaviour more influenced by their voices, to adopt more passive coping strategies, and to have experienced a greater number of traumatic events.

All of this points to a paradigm shift in the way that voice are understood in the context of psychiatry and more broadly in our everyday lives. As Marius and Sandra so persuasively show, voices are meaningful – they convey messages in their everyday presence (what do the voices actually say to me?), onset (when did I first hear a voice, and why?), triggers (do I hear voices when I feel abandoned, euphoric, humiliated, distressed?), and characteristics (who is speaking to me, what sex and age are they, where do they come from and how do I relate to them?).

If you were at last night’s event and would like to write about it for this blog please don’t hesitate to get in touch. Plans are already in place to arrange a follow-up lecture in December, details will be available here or you can [twitter-follow screen_name=’hearingvoice’]